I had the displeasure of making a video of myself this week. Ugh…talk about a buzz kill. Video may have killed the radio star but it also killed my confidence.  (Hope to be able to share the reason for the video with you soon…don’t want to jinx myself.)

I have always had this weird quirk about my personality when it comes to people embarrassing themselves…often when they don’t mean to – but I cannot muster up enough courage to watch it…especially if I don’t know the person.  (I know – that’s so backwards.)  During American Idol I have to turn my head away from the television when someone sings – good or bad. During talent shows I have to hide my face I’m so anxious for the person auditioning. I don’t know what it is…it’s like I can feel their nerves. Sometimes I wonder if I’m more nervous than the person standing up there belting out a horrendous rendition of “I Believe I Can Fly”!

With that being said – when I have to watch myself on film, like I did this weekend, then forget it. I wanted to bury my head in the sand. I thought I had issues with myself in still shots…haha – you have no idea how bad it is in motion.  Voice doesn’t sound normal…and my appearance….Well – camera is not currently doing me any favors! Certainly wasn’t sitting there watching it play back thinking: “Damn, I’d shag me.”

Oh well…that’s what I’m here for, right?! To make baby steps to get to the point where I look amazing on screen…should I have the opportunity to get back on camera that is. Keep your fingers crossed!!! (Wink wink.)

So the scale….oh the scale. Four months in….and apparently we’re carrying the “baby step” theme right on through to the scale numbers. Down just a skosh…

Sorry – looks like I took this picture in dense fog…216.4 is the official number.

So glad that I picked the hottest week of my life to decide to set a goal to “start” working out….went for a walk a few days. No, wait…I didn’t walk for a few days – I went for a few walks….whatever – you get the point!  But this heat is craziness. I was sweating just thinking about walking outside and standing in the sun.

I did decide to bust out a little Shakeweight action this week….I can only imagine what that would have looked like on camera. I’m sure it would have been America’s Funniest Home Videos worthy. While it does look like the stupidest, most ignorant piece of exercise equipment on the market (2nd only to the Thighmaster of course) – I’m baffled to report that it actually works. (There’s a great how-to video on YouTube if you need it. Although the motion is pretty self explanatory.) And my torso is extremely sore.

Hold on…I just said my torso is sore…this is for arms…Ok, so very clearly I am doing it wrong. But it’s moving something around in there. Or just twisting it weird. Wow…I’ve always known I was uncoordinated…but too uncoordinated for a dumbbell you jiggle?! Only me!! 🙂

Week was relatively uneventful otherwise…Gluten is staying where it belongs…OUT of my digestive system. And I’ve had some great recipes again since the last post.  Alex at Natty’s outdid himself again…Fried Green Tomato (coated in cornstarch for a GF girl like me), topped with jalapeño pimento cheese, black eyed pea relish and a shrimp.  Delicious! This tasty morsel, ladies and gentleman, warranted a bigger mama slap than the pork belly!!

Love how this has started to turn into a GF food blog…oh well – at least I’m not gaining! So, Alex…and any other chef/cook that wants to make me their GF guinea pig – I welcome the challenge!!!  Bon appetit!

“A diet is the penalty we pay for exceeding the feed limit.”  ~Author Unknown

No, your eyes did not deceive you. I did say God Bless the Pork Belly.

If you want to get me all hot and bothered, whisper “pork belly” in my ear. I ordered this at a restaurant for the first time last week. It was beyond slap your momma good. I was with my mom and it warranted an action far more grandiose than smacking her. (Side note: I would never intentionally slap my mom.)  If you’ve never had it before…you’re missing out.

I’m sure you’ve had bacon before (pork belly is the cut used to make bacon), but this is completely different. Let me try and describe it for you.  Ok, close your eyes…ok, no, don’t. Guess it’s a smidge difficult to read with your eyes closed. 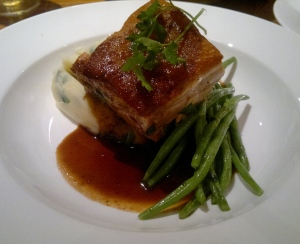 I feel like I needed trumpets playing while that picture is being viewed. It needs Ariel from The Little Mermaid in the background singing. Streamers and confetti should be raining down.

I considered making a deal with myself while I was eating this. I honestly believe I could give up every unhealthy horrible food and/or beverage that I have EVER craved or eaten just to allow myself a taste of pork belly every once in a while.

While eating it, I had another thought…as delicious and pristine this pork belly was, I reminded myself that pigs aren’t normally eating fried and processed foods. I’m not saying that I want to get my belly in tip top condition so that it’s delicious to eat, but it did make me wonder how ungodly the human stomach must appear with all the hydrogenated, fried, processed, fermented crap that we (mostly I) have ingested in one lifetime.  It’s almost like being in 2nd grade again and looking at the lung of the smoker vs. non-smoker….”Here, Ms. Hayes, is the belly of an organically fed pig…notice how flawless and succulent…now here is your belly, all crusty and gangly from the bologna and French fries you’ve eaten in your lifetime.”  I need to strive for that perfect belly! On the inside and out.

Aside from my belly composition epiphany, you may now be asking yourself, “why is her blog post for this week about one of the most fattening things on the planet?”  Well, yes, this is a blog about weight loss. But this is also indirectly a blog about food and I need a little humor after this week’s result.  I went the wrong way on the scale this week…though not by much. 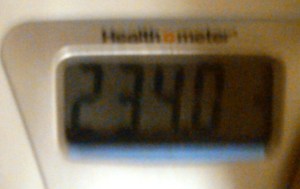 I needed this to refocus myself.  I’m sure I could have burped an extra time and not gained as much. Nevertheless, I was not careful about what I ate last week. That compounded with the fact that I had been eating almost nothing the week or 2 before really bit me in the ass. I know now that I need to keep my metabolism up so that if I do happen to eat 300 more calories than the day before that my body just doesn’t immediately decide to prepare for famine and store food for the winter around my belly button.

I need to plan better. I want to tell myself that I’ll make the best possible option at the last minute, and I should know by now that I don’t.  It’s not even that I make a bad food choice…I don’t make a choice at all. Eating 1 meal a day is catching up with me.  For those of you that are working on or have been successful at weight loss, what are some of the tips and techniques you have for staying focused food wise or making sure you plan ahead? I know it sounds simple to just say that I’ll plan out everything I’m going to eat 7 days in advance, but I don’t know how realistic that is all the time. Perhaps that’s the problem I’ve had in the past.

Aside from battling some type of food-borne illness or bug or whatever it is that keeps rearing its ugly head every few weeks with me, my attention is completely refocused. I’m going to work on the planning aspects of the diet and hope to get some great feedback from you all on what I can do to not make this organizing-what-I’m-going-to-eat so overwhelming.  I did take a very small step backwards…well the scale did, mentally I’m still moving in the right direction, but despite a slightly higher number, I feel thinner and my clothes are fitting better. My body has never made sense…gain weight and lose inches! I’ll take it though…here’s to getting everything back on track next week!!

“Failure is the opportunity to begin again, only this time more intelligently.” ~ Henry Ford 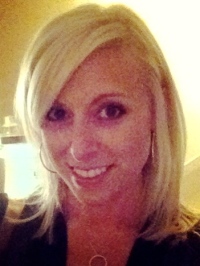